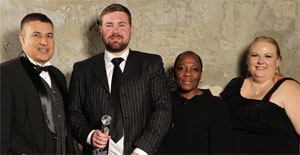 Johan Kotze is a final year PhD student. He proposed a concept for concentrating solar power that in part comes out of the next generation nuclear power technology. Johan took this proposal from a concept to a CSP system thermodynamic cycle and in the process has uncovered a number of solutions to existing pinch points in the central receiver power plant.

Johan has published in the Solar Energy Engineering Journal of the ASME and has presented multiple times internationally on the concept. His was the only paper addressing this topic at SolarPACES 2011 and by 2012, several consortiums from Germany and USA were presenting on similar work at SolarPACEs 2012.

Link to the awards.